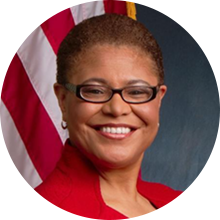 The Honorable Karen Bass was elected the Mayor of Los Angeles in December 2022. Prior to becoming Mayor, she represented California’s 37th Congressional District from 2011 to 2022.

Ms. Bass serves as a member of the NFYI Board and plays a critical role by contributing her experience as a long-time advocate for foster youth.

She served on the House Judiciary Committee and the House Committee on Foreign Affairs where she was the ranking Democrat of the Subcommittee on Africa. In Washington, she was selected by Democratic Leader Nancy Pelosi to serve on the prestigious Steering and Policy Committee, which sets the policy direction of the Democratic Caucus, as Organization, Study and Review Chair. Ms. Bass also played a leadership role in the Congressional Black Caucus (CBC), where she served as Secretary for the 114th Congress.

Throughout her career, Ms. Bass has maintained a focus on our nation’s foster care system. In her first term, she created the bipartisan Congressional Foster Youth Caucus along with co-chair U.S. Rep. Tom Marino (R-Pa.), which aims to transform the foster care system in America.

Prior to serving in Congress, Ms. Bass made history as the first African American woman to serve as Speaker of the California Assembly. In this powerful state legislative role, she helped California to recover from the greatest economic crisis since the Great Depression.