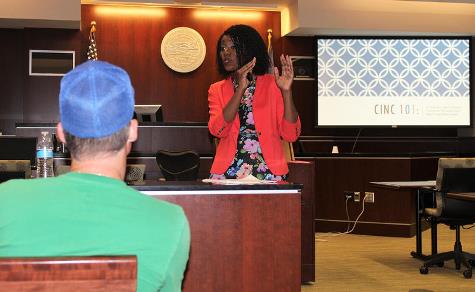 Navigating Kansas foster care system can be a challenge for parents | Welcome to Wyandotte Daily!

Editor’s note: Kansas privatized its foster care system in 1997, after a lawsuit revealed widespread problems. Twenty years later, the number of Kansas children in foster care has shot up — by a third in just the last five years — and lawmakers are debating whether the system once again needs serious changes. The Kansas News Service investigated problems in the system and possible solutions. This is the third story in a series.

A few years ago, Olathe attorney Shanelle Dupree noticed a pattern in the foster care cases she handled: Most parents had little understanding of the system or what to do if they wanted their children back.

So she started a class to try to change that. Once a month, parents who have a child in foster care can meet in a Johnson County family law courtroom to learn more about the basics of the child welfare system. Most parents are referred by the courts as part of the plan to prove they can take care of their children, Dupree said.

In the state’s privatized foster care system, the Kansas Department for Children and Families investigates alleged abuse and neglect, while two private contractors, KVC Health Systems and Saint Francis Community Services, provide foster care services, including working with parents on a plan to make their homes safe for children. Courts decide if children should be removed from their home and whether they should return.

Through the class, Dupree hopes to help parents navigate the system during a time that can be stressful for them and their children. Some parents in the May class had basic questions, such as the difference between DCF and KVC. That confusion is not unusual, Dupree said, and can contribute to longer stays for kids in the system.

“We use a lot of acronyms and then we say, ‘Figure it out,’” she said.

After a court places children in foster care, caseworkers outline tasks that parents must complete, such as getting mental health counseling, addressing unsafe conditions in their home or taking classes on appropriate discipline. Children with serious behavior problems sometimes also have their own tasks, Dupree said.

The caseworker then presents updates on the parents’ progress to the court at scheduled hearings, and the judge determines if the parents have met the requirements for the children to return home. DCF sets a goal of returning children to their home or finding them an adoptive family in 18 months or less, but complicated cases sometimes take longer.

According to information from DCF for the 2016 fiscal year, the most common reason for children to be removed from their parents’ home was physical neglect, which represented about 17 percent of removals. Substance abuse was the second reason, at 16 percent, followed by physical abuse, at 14 percent.

DCF defines physical neglect as parents’ actions or behaviors that put children at risk of harm, such as not providing food, clothing or shelter. Not meeting needs due solely to poverty isn’t considered neglect under Kansas law.

“We have to be able to connect drug use to harm or likelihood of harm to the child,” she said.

Deneen Dryden, director of prevention and protection services at DCF, estimated substance abuse is a contributing factor in about 40 percent of child welfare cases. Parents don’t always cooperate when caseworkers say they need to seek treatment or make other changes, she said.

‘At first it was very confusing’

Sometimes, a lack of cooperation from parents stems from confusion or fear, Dupree said. Many caseworkers have different life experiences than the parents they work with, which makes it difficult for them to trust one another and move forward, she said.

A.J., who attended Dupree’s May class, said meeting the conditions required to regain custody of her three children has been challenging. She asked to be identified only by her initials to protect her family’s privacy.

A.J. recently had a baby who experienced withdrawal symptoms after birth because she had been taking suboxone during her pregnancy. Suboxone is used to treat opioid addiction, and some women continue taking it during pregnancy, because going into withdrawal can cause a miscarriage. A.J. was using her husband’s prescription, however, so there was no medical record that the baby’s symptoms didn’t stem from drug abuse, she said.

Now, she and her husband have to meet with their caseworker weekly, take drug tests and get substance use counseling, A.J. said. Other conditions include making sure their children are up-to-date on their medical appointments, she said.

“It’s just a lot of things to do to please them,” she said. “At first it was very confusing, and you’re panicked because your kids are taken by strangers.”

Even if parents understand the foster care system, however, they may struggle to meet some of the conditions of their plan, such as seeking mental health and substance abuse treatment.

“We’ve got less mental health treatment. We’ve got less substance abuse treatment for those families,” he said. “That keeps those kids in care longer.”

KVC sometimes provides in-house treatment in the Kansas City area, Dupree said, but many parents are hesitant to trust a therapist who works for the organization overseeing their reintegration plan. Other times, parents can get some assistance paying for an evaluation from a community provider, but that’s on a “case by case basis,” she said.

Saint Francis Community Services offers substance abuse treatment only in Kansas City, Salina and Great Bend, though some parents may be able to get treatment through community agencies. But those who aren’t able to travel to those programs or find a provider locally may not be able to get treatment, which can make it difficult for them to complete the plan.

Rachel Marsh, executive director of government and community relations for Saint Francis Community Services, said its mental health services are designed to complement those from other Kansas behavioral health providers, such as community mental health centers and safety net clinics.

Taylor Wine, a district magistrate judge in Osage County, told the House Children and Seniors Committee earlier this year he thinks DCF sometimes sets standards that are too high for parents to meet. Caseworkers also don’t always keep birth parents updated on their children’s situations, and that can slow the process, he said.

“I am aware of a particular example where a father found out about his child’s hospitalization for a mental health crisis only after his medical insurance was billed,” he said.

Some parents might not be able to fix their family dynamics within 18 months, but the system doesn’t provide the option of giving them more time, said Dona Booe, president and CEO of the Kansas Children’s Service League, a nonprofit that provides programs designed to prevent child abuse and neglect.

While it might seem that the threat of a court taking their children would make parents address their problems faster, they can become overwhelmed and give up, she said.

“That is an added pressure in a life that is already chaotic and stressed to the limit,” she said.

Meg Wingerter is a reporter for the Kansas News Service, a collaboration of KCUR, Kansas Public Radio and KMUW covering health, education and politics. You can reach her on Twitter @MegWingerter. Kansas News Service stories and photos may be republished at no cost with proper attribution and a link back to kcur.org.