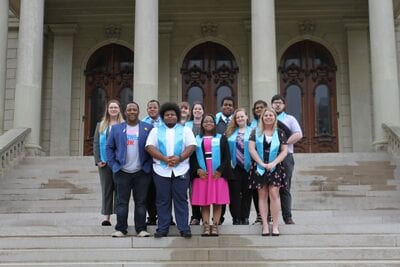 Quote of the Month:

Message from the New Executive Director

It’s probably been awhile since you received an email like this from the National Foster Youth Institute. We may have been a little quiet lately, but that doesn’t mean we haven’t been hard at work! We’ve implemented lots of changes recently. From staffing to programming to strategic planning to strengthening our relationships with funders and community partners, we’ve started building on the foundation that will empower the youth we work with to make transformative change in their communities.

I joined NFYI in March, completely excited about the mission, enthusiastic for the work ahead, and deeply committed to the population we’re working with. I’ve always believed that there is nothing more important than protecting our children. And there’s no group more capable of creating change in our child welfare system than the young women and men who have first-hand experience in it.

Since I started at NFYI, I’ve met with many stakeholders in our community and had some tough conversations. The most challenging were with youth who want to do so much but don’t have enough support or resources. It was hard to hear their excellent ideas and valid frustrations, while knowing that NFYI still has work to do to put together the resources to sufficiently support their efforts. But those conversations also deepened my commitment to finding the funding, partnerships, and opportunities that will make our shared vision a reality.

When I welcomed the 2019 Shadow Day participants to Washington, DC in June, I told them that they were part of the NFYI family from here on out. I hope that you are too. Please don’t hesitate to be in touch about how we can all work together to make the child welfare system a beacon of hope for families in need.

Since the beginning of the year, NFYI has added lots of new staff who are dedicated to our mission of transforming the child welfare system by empowering youth and their families. Here’s a look at who’s on the team.

As the new executive director, Sally Fairman is working closely with our board, funders, and community partners to lead NFYI forward. She joins NFYI from The Unusual Suspects Theatre Company, where she grew the organization’s budget and programs ten-fold. You can learn more about her background here.

Brittney Venter had key roles in DC and Michigan Shadow Days and works with our Michigan Leadership Corps. She’s a former foster youth who is also a PhD student at Howard University.

Mariah Craven managed Shadow Day in Washington and supported Michigan Shadow Day. She’s currently serving as a communications strategist, helping us get the word out about NFYI.

And Rafaela Velasquez is temporarily filling in as NFYI’s office administrator based in LA, managing human resources, and supporting staff in Los Angeles and DC.

In just a few days, NFYI is opening our first office space in Washington! We’ve had staff working in DC for over a year now, and they’re excited about moving out of the coffee shops and into their own space. Our new office will offer us a chance to expand NFYI’s staff and bring in youth to begin the work of organizing in DC. The new office will be at 14th and L, NW.

In June, NFYI brought 120 current and former foster youth to Washington, DC for our annual Shadow Day experience. This week-long program trained participants in: telling their stories, advocating for policies and improvements to our child welfare system, and understanding the role that the federal government plays in foster care. Participants met with Rep. Karen Bass, Speaker Nancy Pelosi, and many other elected officials from both sides of the aisle.

Their training culminated in a day on Capitol Hill, where everyone spent time shadowing a Member of Congress. The Shadow Day participants’ work was celebrated at a luncheon thrown in their honor at the Rayburn House Office Building, where they heard from Marcus Scribner, star of the television show black-ish, and a passionate supporter of NFYI.

NFYI’s program team is assisting the participants in creating and executing strategies for following up with the Members of Congress and building strong relations for future advocacy. You can see news coverage of the event and read some columns that participants placed about their experiences here.

A week later, our Michigan Leadership Corps participated in Shadow Day in Lansing, MI. We teamed up with Michigan’s Children for a training and advocacy program that brought more than a dozen youth to the state capitol to meet with their legislators. Participants shared their own experiences in the child welfare system, pitched the idea of creating a Foster Youth Caucus in the Michigan State Legislature, and got a behind-the-scenes tour of the Capitol.

…NFYI will be hiring interns this fall in LA to kick start our new organizing efforts with LA’s TAY constituents. Look for more details and our application in the coming weeks!…