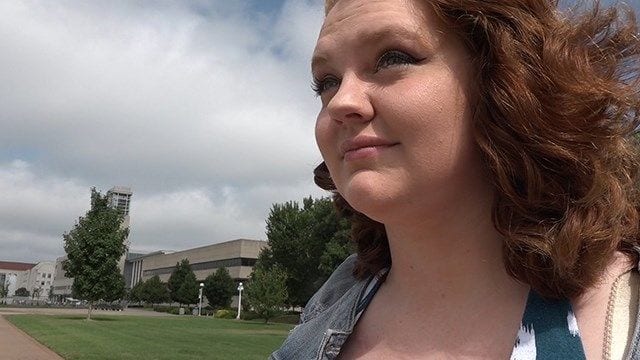 Today, we bring you the story of a college student that has gone above and beyond and a local university has taken notice.  Jasper Gain, lived with her mother and stepdad till she was 13 and then was sent to live with her biological father.”After a period of time living there, there was a lot of stuff I didn’t really agree with that was going on in the house and him and I wound up getting into it and he kicked me out and then I went into foster care,” says Gain. In the foster system, Gain felt like all she had was herself. And then came high school. “I ended up dropping out my freshmen year the first semester.”Knowing that her education was important, she got back into school. But she soon learned she couldn’t keep up with working and going to school full time. So, she dropped out a second time and pursued her GED. Passing the test in two weeks, she went on to continue her education at Missouri State University. But in the summer of 2016, Gain noticed she was having health issues.”They said, ‘We think you have cancer.’ I said no I don’t have that,” Gain explains. “But they told me I was going to have immediate surgery and when I woke up they told me I had stage 4 ovarian cancer.”And after a year of treatment and taking a break from school she received a call she never expected. “So, the day I was done with chemo I got a call that my biological father passed away and they needed somebody to come tell my younger sister. The police just left her there with me and I went through the process of becoming her legal guardian.”Having to switch from parent to sister to student, Gain’s story was recognized by MSU and she was awarded with an Emergency Scholarship Fund and a Maroon Nation Scholarship. Helping her achieve her dreams and education. Despite her circumstances, Gain says she wouldn’t change a thing and plans to graduate in 2021.