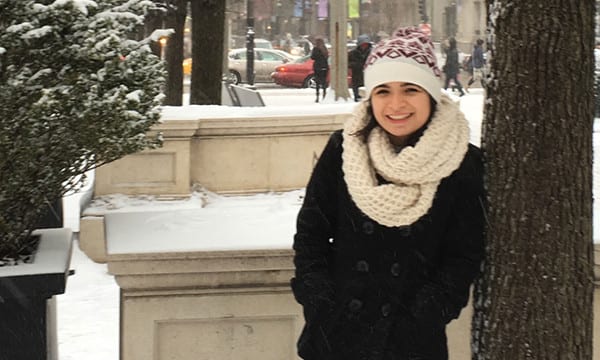 I entered foster care when I was 14. My mom had abused me physically and verbally and I went through 27 different placements from 14 to 21 years old. I went to about 17 different high schools, and three group homes. I got arrested when I was 14, but I got adopted when I was 17 by my group home administrator, I lived with her from 17 to 21 and I recently moved out and got my own apartment.

When I entered foster care, I was placed into my first foster home. When I got there it was just me and the woman in charge. She would tell me pretty consistently that she didn’t care about me, or what happened to me or why I was in foster care. I was her paycheck, and that was it. That was made very clear. She would always threaten me if I said that I didn’t feel comfortable there with her, and she would always say that once I was in the group home nobody would want me, which I learned later, wasn’t true at all. It wasn’t a good fit for me at all, so I was taken out of there and I placed into a second foster home. It was great; very family oriented and I felt very welcomed, very safe and very loved. But I was just 14-years-old, trying to figure out everything that was going on my life. So I got in trouble in school quite a bit. So the woman at that home, she couldn’t keep me because she was older and my behavior caused her a great deal of stress. I lived with her for six months, and after that, she kicked me out. However, she would still bring me food to the other foster homes I was in because they were no good at all. One woman I lived with had a loaded refrigerator in her bedroom, but the refrigerator in the kitchen would only have eggs, hot dogs and milk, and a cup of noodles. Every day for dinner we’d have eggs, hot dogs and beans mixed all in one bowl or a cup of noodles. That was our only meal at the home because we would eat breakfast and lunch at school. So I would call the woman at my second foster home, and she would bring me food anytime I asked for help. When I got my act together, this woman took me back in. Unfortunately, that didn’t work out either.

A little while later, my mom ended up moving, and I don’t know why it is this way, but when your parent moves out of the county, they put you in a foster home close to them. So I moved out to Los Angeles and was placed into a foster home there. My mom did whatever she could do to get me back. I begged the courts not to send my back to my mom, but they just didn’t listen. I moved back in with my mom in January 2010. It was me, my mom, her boyfriend, and my brother. We never had food there. I never ate, just usually had a can of peaches throughout the day and that would be it. I would also never see my mom. She would always be out with her boyfriend. I was living with her from January that year until April. And then on April 1st, my dad was murdered. He was shot in the head and twice in the heart at a fast food restaurant. So I had a lot going on. Then in June 2010, my mom ran over her boyfriend with her car. They often had domestic violence issues. After that, the county told my mom and her boyfriend that I couldn’t live there any more. She had to decide whether she wanted me there or if she wanted her boyfriend. Then she signed over her parental rights.

I ended up living with a family member but that still wasn’t a good environment for me. I felt I was just being taken advantage of of for the money that came with me. I got taken out of that home and put back into foster care. I got arrested, and was kicked out of school. My school was really my only safe zone. It was all I had. However I threatened my teacher and even though she didn’t want to press charges, because I had been suspended before, the officers pressed charges any way. So I went to juvenile hall for three weeks. After that I experience, I decided I would never do that again. So I didn’t. I got out on probation, but started drinking with my friends a lot more. I was trying to cope and deal with my father’s death and my mom pretty much just giving me up. Since I was on drinking, I was violating probation because I was a minor, so I was sent to a rehab facility. There, however things changed.

“The Legacy” is one of the films in the Youth Voices Video Project, a collection of foster youth-produced films from PBS SoCal’s, To Foster Change. Laura chronicles her journey out of foster care and into a loving forever home.

At the rehab facility, I got all the tools I needed to boost my confidence and build up my self esteem. I learned how to love myself and to accept things for what they are. I also learned that I could change the things that I have control over and just trust the process of life. I got out of rehab at 16 and learned that getting in trouble just wasn’t cute it anymore. It wasn’t funny and it wasn’t fun. It didn’t get my name anywhere good. After getting out of the juvenile facility, I was placed into a group home and was jumped by ten girls. I ran away and was placed in a foster home that didn’t work out. I was then placed in a six bed group home where I did pretty well. It was there that I met the group home administrator who would do overnight stays because we didn’t have night staff. I had horrible insomnia and she would just stay up and chat with me, or we would play games all night. She just really took an interest in me. She became my mentor and then, she became my mother. She took me into her home and legally adopted me.

Throughout the foster care system there are many, many downs. There are also a lot of sad moments, a lot of lonely moments, and a lot of scary moments. But this foster care system saved my life. It brought me everything that I have. My apartment, I would have it if it weren’t for the foster care system. My car, and most importantly, my new family wouldn’t be here if it wasn’t for the system. I still had a lot of issues and a lot of trauma and a lot of things I had to work on. After this woman took me in she showed me what unconditional love felt like. She worked through it all with me, and helped me learn that if you live an honest life, great things will happen to you. You just have to keep striving for better things and you can’t give up at all, ever. My new mother guided me through and helped me graduate high school. I never thought about going to college but she helped me get there. Most importantly, however she just really loved me. She loves me and she gave me a family when I had absolutely nothing or nobody. So now here I am.

When I think about what would have made my experience better, it would only be if I had someone stable in my life. I never had anyone stable. And when I got put into foster care, I couldn’t see anyone any more. I couldn’t talk to anyone on the phone, I couldn’t hang out with my friends. I couldn’t call anybody. I was isolated. So now, I have anxiety because of all my trauma. If I had somebody to guide me through those years, and to tell me everything would be ok, it would have been a lot easier. I also never felt like I had a voice. I would report foster parents for abuse and find out their homes were still open to children. I would always ask myself: why? In my experience it’s always your word over an adult’s word; and the majority of the time, your word means nothing, especially in group homes. I don’t believe there is such a thing as a bad kid – you do what you are taught. You are a product of your environment, we are all just learning. You go into a group home and are labeled as a bad kid and you learn not to trust anyone.

If I had a chance to talk to adults in the foster care system, I would ask them to show more love and compassion. Love goes a long way. Love is strong word, but you can always be compassionate. I’ve had staff stay up and talk to me when I couldn’t sleep at night. I’ve had therapists who would just let me sit in their office and talk and cry. They would just be there to reassure me everything would be ok and that great things would happen for me. Even more than earning an allowance or an outing, having a good conversation with someone to know they just cared meant much more.

I would tell the young people in the foster care system that loving themselves is the key to happiness. I would tell them that if you can find love for yourself, and know that you will always be there for yourself and no one else can tear you down. No one can tear you down, because at the end of the day, you are all you’ve got. As long as your mentality is positive and honest, then you’ll find a way to make it through.