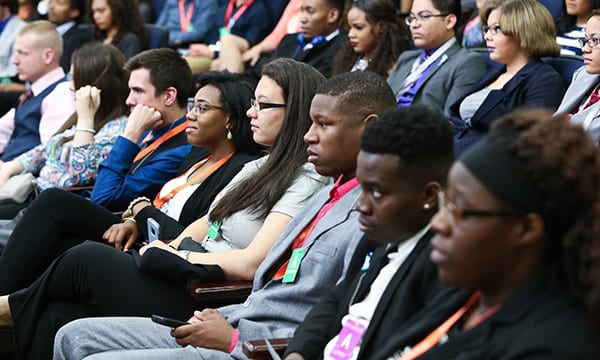 “Youth engagement” is all the rage these days in philanthropic circles—and for good reason.

Young people are among our most innovative thinkers and passionate advocates—especially when it comes to tackling the problems they and their families experience firsthand. This is why increasing numbers of social justice funders are realizing that if we want to support families in advocating for themselves, engaging youth is not simply a nice thing to tack on; it is a necessity.

The challenge for philanthropists is figuring out how to engage youth in an authentic way. One omnipresent danger is tokenism. I will never forget the young man who, after speaking on yet another foundation-hosted “youth panel” tucked away at the margins of a larger conference, expressed his disillusionment with the lack of response to his incisive suggestions.

Young people challenge us. They make us uncomfortable. This does not mean we ought to back away from engaging with them. The same “youthful idealism” that leads young people to call out hypocrisy and insist on honest interactions can push us, as adults in positions of power, to think more deeply about how we exercise that power, and how we can do better at partnering with all of our allies, whatever their age.

When funders try to “bring youth to the table” without taking stock of the power differential, sandtraps abound: culture clashes; crossed wires; poster-child syndrome;  race, class and gender gaps; and simple discomfort in environments that were not designed with young people in mind.

At the Marguerite Casey Foundation (MCF), we have given a lot of thought to the question of how to get it right when it comes to youth engagement. In 2010 we set up the Sargent Shriver Youth Warriors Against Poverty Leadership Awards, where we recognize youth leaders from across the country who are making tangible changes in their communities. We started this because unless we, as foundations, find ways to engage authentically with young people, we cannot stay on mission, much less achieve our goal.

During a recent board meeting in New Orleans, we visited the Isaiah Institute, which works to rebuild and restore communities in that region. While we were there, we had an informal conversation with two dozen young men who were part of the Institute’s Street Peace initiative.

These young men spoke openly about their goals—as  individuals, members of families, and aspiring activists—as well as the barriers they face as young men of color growing up in a jurisdiction where a stunning 99 percent of all youth arrested are African American, and more than half of Black men of all ages are unemployed.

Even as they expressed deep frustration, they also spoke about the strength they drew from one another; about the love they had come to feel for each other and the trust that had developed among them.

Then they told us what they needed. Their request was so simple, it pierced the heart to hear it.

What they needed, they told us, was a room, a phone line, and a couple of computers. Had they come of age in Silicon Valley, or any connected suburb, they might have called what they were hoping to build a “hive”—a physical space where a group of determined young people could work together, sharing ideas, resources, and access to the communications tools that are the building blocks for any 21st century endeavor.

These young people were trying to find their footing in a region that had been devastated by one of the great natural disasters of the century, exacerbated by a botched response of epic proportions and seemingly-intractable racial inequities in education, incarceration, and most of all employment.

Many lacked something as basic as a cell phone. Most had little or no access to computers. If they had access to something as simple as a place to pick up messages and access the Internet, they told us, they could figure out how to get a foothold in an unwelcoming economy, whether that meant expanding their job search or starting their own business. They would figure it out together.

This encounter stayed with me, and I think of it every time I hear the term “youth engagement.” What if instead of asking these young men what they needed we had held a symposium or commissioned a white paper on the issues facing young people in New Orleans?  By asking, listening and then acting, we became the student and they the teachers. With their straightforward articulation of their needs and their goals we were able to offer support they could truly use. Had we not sought their input but rather decided from a distance what they most “needed,” we might have walked away feeling good about our support of young people but would have left behind something with little direct benefit.

Instead, these young people and their mentors at the Isaiah Institute took their idea and, with foundation support, ran with it. They used MCF funding to launch what they dubbed a “Business Incubator.” Then they took it a step further, initiating a collaboration with the Orleans Parish Sheriff’s Office to expand entrepreneurial opportunities for justice-involved young adults, including probationers and parolees.

The lesson is clear: As funders we need to rethink how we engage youth. We need to do more than “bring them to the table.” We need to ask them where to sit.